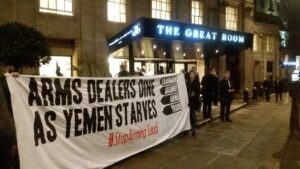 On March the 23rd, the Aerospace, Defence and Security dinner will bring arms dealers, MPs and military personnel together to schmooze, swill champagne, and feast on expensive food. At the same time, over 16 million Yemeni people face acute hunger, starved as a result of the Saudi-led coalition’s bombing of their country. Many of the bombs are made by the arms companies present, and have been sold with the support of the politicians in attendance.

The UN estimates that 377,000 war related deaths will have occurred by the end of 2021, including 12,000 civilians in directly targeted attacks. The war in Yemen has caused one of the worst humanitarian crisis in the world. The UK government is directly involved in causing this suffering; only legal action from CAAT has forced the government to review arms sales to Saudi. Meanwhile, UK-made planes are dropping UK-made bombs in Yemen, and UK arms sold to Turkey have been used in the decimation of the Kurds. UK arms sales fuel death, destruction and violence across the globe.

We will not let those profiting from and enabling war to celebrate unchallenged. Bring yourselves, friends, banners, placards and your voice.